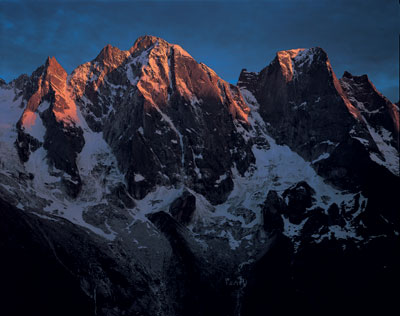 The North sides of Badile and Cengalo, Switzerland

Photography played a role as important as climbing to build up my feeling of the world of the mountains. To make pictures of the large frozen faces of Mont Blanc, of the immense granite slabs of Pizzo Badile or of the vertical cliffs of the Dolomites was just another new step of a natural process which started more than thirty years ago with my first ascents.

To materialize on one film and in one second the mysterious drive that makes me feel so deeply linked to Nature became an unavoidable necessity. Especially in the first years I took pictures only of the most impressive faces as if I wanted to “clean” them from any other image that could obscure those extraordinarily harsh and sublime expressions of Nature´s force. 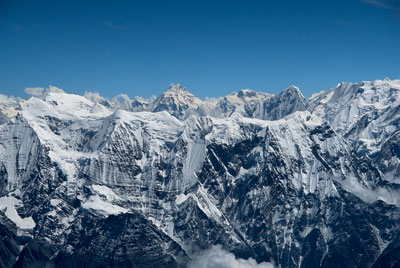 Manaslu and Himalaya from Dhaulagiri, Nepal

So, by instinct, I gave life to the most intimate essence of photography, which is the same of all other expressive forms: by pressing the shutter, I captured the emotion lying in the deep of my soul, and I gave it form on the film. Time after time, by gradually refining my technique, and while I got to know better and better the photographic medium, I realized that this work of making emotions tangible is a moment that owns the same magic and perfection of the moment of reaching a mountain top. And almost unconsciously I began to make my first steps on a new path of my life.